Welcome to a brand new edition of Blog Paper: Unclogged. The headlines are true, the details may very well not be!

The new Justice League trailer dropped this week. The next chapter in the DCEU franchise looks like it has a lighter tone than previous entries, possibly a creative decision to course correct the much maligned, yet profitable series. Justice League will be followed by various new movies featuring comic characters you have barely heard about which are all in various stages of disarray. Warner Bros. and DC are expected to soon announce that they are block booking all dates between now and 2035 for the release of the movies to avoid having to keep releasing costly press releases when they have to push them all back again due to creative problems. A notable character that is missing from Justice League is The Green Arrow. Charlie Hunnam star of Sons of Anarchy is a fan favourite for the role but he apparently has no desire to play Green Arrow. He has stated that comic book movies are just not his taste, a feeling expressed by many when watching a DCEU movie

On the other side of the comic book movie fence Marvel are continuing their planned domination of the genre and released new Spider-man Homecoming  posters. They feature Spider-man in many exciting, action packed poses such as hanging from a sign, lying down and sticking to a building. Previous images to be used of Spider-man in bed, sitting at a desk and enjoying a soak in the tub were considered not frenetic and exciting enough so the Marvel execs went with the images we got. 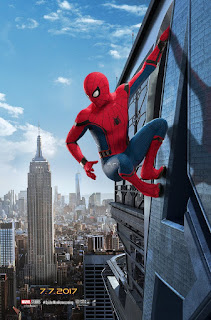 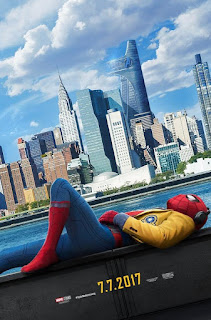 A new Spider-man spin off is planned, outside of the MEU, by Sony with baddie Venom taking the lead. Rumour has it the  movie will be R rated. The reason for this being that main cast will be heard to drop many an F Bomb when they discover the movie is not being produced by Marvel and box office is likely to be as rotten as having a festering symbiotic alien attached to your undies. Look forward to a Venom reboot being announced shortly after this movie is released.

Las Vegas CinemaCon Distributors convention took place this week. Members of the cinema distribution Illuminati were treated to exclusive previews of some of the movies they can look forward to investing in by default in the up coming few years. Some of the clips that were shown came from the likes of blockbusters Justice League, Blade Runner 2049 and War of the Planet of the Apes. Some attendees were disappointed to be turned away at the door because they were in in cosplay - apparently it wasn't that kind of convention. 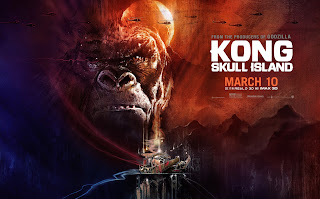 Kong Skull Island has been bashing it's chest at the box office recently. Cinema viewers were very disappointed that there were no scenes included of Kong eating a skyscraper sized banana, or a bit where he flings Mount Rushmore sized lumps of monkey poo at passing tourists. Despite this, follow up/sequel Godzilla 2 production moves along at a pace. The movie is casting has included Millie Bobby Brown best known for her role as Eleven in Stranger Things. Millie's casting has lead rumours to a further cross over event entitled  A Stranger Godzilla vs King Kong and Things. A musical ,singalong verson of King Kong is also due called Kongalongathon.

Photos of Alicia Vikander as Lara Croft in the new Tomb Raider reboot have been released. It looks like poor old Lara is going to be in for some major orthodontic procedures. As we can see in this picture, Lara is ready to do battle with an evil infestation of plaque using a giant toothpick. 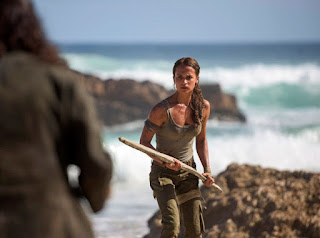 Han Solo Plot details have been released and fans are a little disappointed to find out that it will centre around the iconic smuggler being caught going through the nothing to declare section at Gatwick Airport and being caught by the authorities with an unauthorised pomegranate in his hand luggage and having it confiscated. Han immediately springs to action filling in form 74505b to be able to have his pomegranate released from quarantine and forwarded to him on Tatooine. 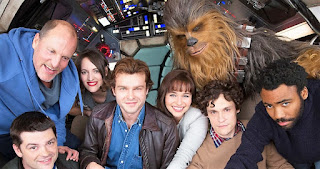 It seems that Harry Styles of One Direction fame was up for the part of Han Solo in the new spin off . When asked why he was chosen he replied "God Only Knows" apparently producers said "It Gotta be You". When asked if he knew why he eventually didn't land the part he related that it was because of all these "little things."

Arnie "Arnold Schwarzenegger" Schwarzenegger has chimed in on Terminator series rumours. The franchise is not dead according to the Austrian Oak. Paramount has recently dropped plans for follow ups to Genysis like so many SkyNet A bombs. Reports suggest that Arnie has confirmed he is still attached to star in the next movie but reading his quotes closer what he actually said was someone, somewhere will make a Terminator movie at some point which will star people who will be directed by another person. To find out exactly what happens with the movie jump on into a time machine, flash forward five years or so, watch the movie then travel back in time around two hours so you can stop yourself wasting the price of the cinema ticket.

Posted by Ian Richards at 13:58 No comments: